Combining a love for Korean pop music and colour palettes in visual media, this is a brief look at the beautiful composition, tones and cinematography in Come Back Home by 2NE1 (YG Entertainment, 2014).

I think some songs have an instant calming effect within hearing the first couple of bars. This is one of them – opening with a xylophone, it’s a gentle, sad song that uses a Matrix-type plot in the video to symbolise lovers becoming emotionally or physically distant. In this case, the four band members rebel against a utopic virtual world where people are spending too much of their time.

The most striking thing about this video is the care put into its visual aesthetic and the fact that it contains a plot. This is definitely a bit unusual in k-pop videos which lean more frequently towards standard dance routines.

The video has two story lines: one purely in the real world featuring a normal girl (Dara) whose boyfriend is addicted to the virtual paradise, and one following all four members (CL, Dara, Minzy and Bom) as they go from their real world (set in some kind of ‘outcast’ science facility) to infiltrating the virtual environment and destroying it from the inside. Like the characters in The Matrix, the group take on a more stylised and futuristic aesthetic in the computerised reality as their virtual selves. It’s not made clear if Dara is the same character in both plots.

As colour palettes in film stills are intriguing and this video is very striking in its use of colour, I thought I would give some analysis a go, dragging the remnants of my almost-forgotten film studies minor out of the depths. 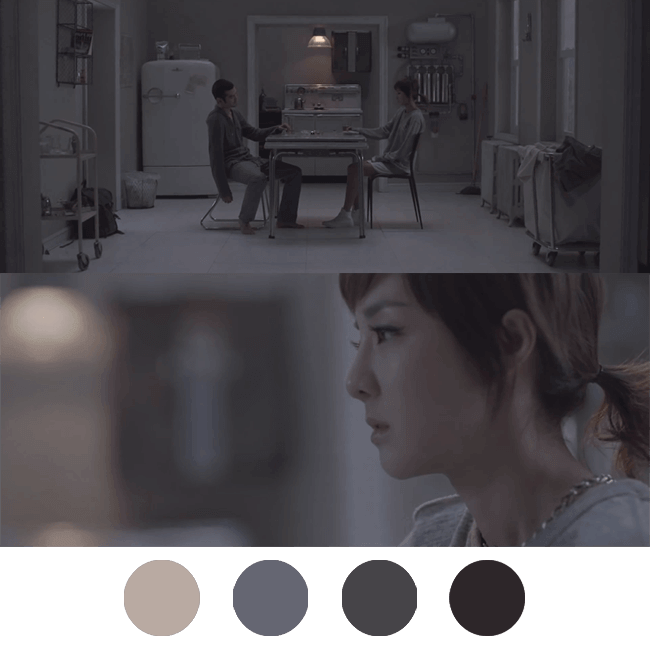 Dara’s apartment is bleak and muted in grey – there are no key colours, only slight tinges of blues and purples and occasionally yellow from lighting. It succeeds in representing the dull, boring nature of the real world that the man is trying to escape from, while simultaneously illustrating Dara’s despair from her inability to stop her boyfriend leaving her for long periods of time.

The television (out of shot), with its advertisement for the virtual paradise, introduces some saturation and warmth to the frame – the virtual world is starting to bleed into reality, enticing those susceptible. The influence on the television is clearly shown through the difference in the intensity of the tones between the shots where it’s off and then on, as the colour palette itself remains the same. 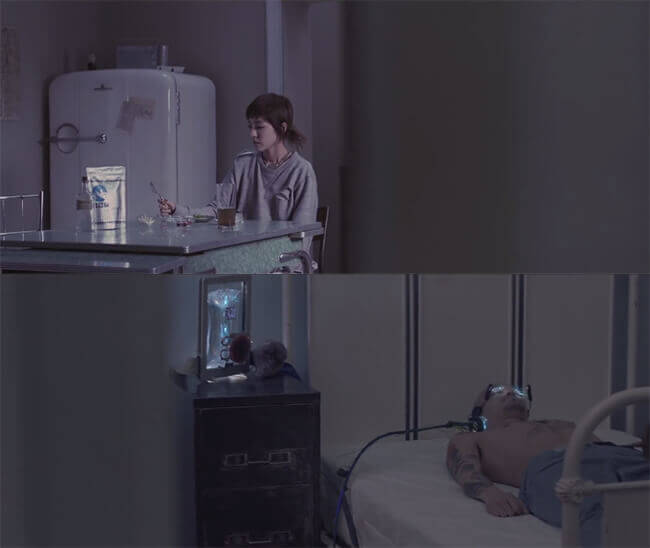 Technology provides the only light source within the frame here – which uses visual cues of distance and framing to highlight Dara’s observation of and detachment from her boyfriend.

Another well-created colour palette is the hints of yellows and muted blue spread throughout the frames of CL in the real world destroying the power supply of a projected advertisement. 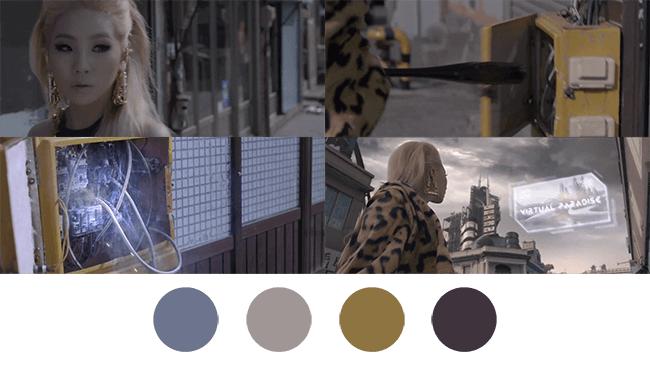 I love the consistency of the shots here – her coat, earrings and hair match the environment and the colours are so complementary. It’s a scene of only a few shots but shows the care that’s been taken in creating the video.

These muted environments are in direct contrast with the band’s scientific lair – where they are making their paint bombs, and, (pretty much exactly like The Matrix) enter the virtual world using the VR technology. 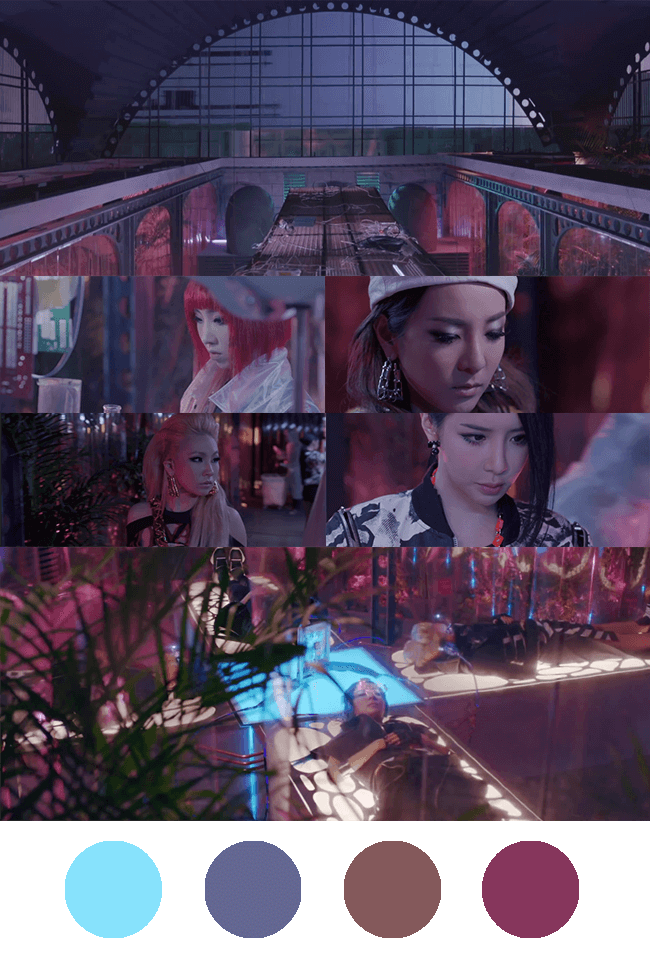 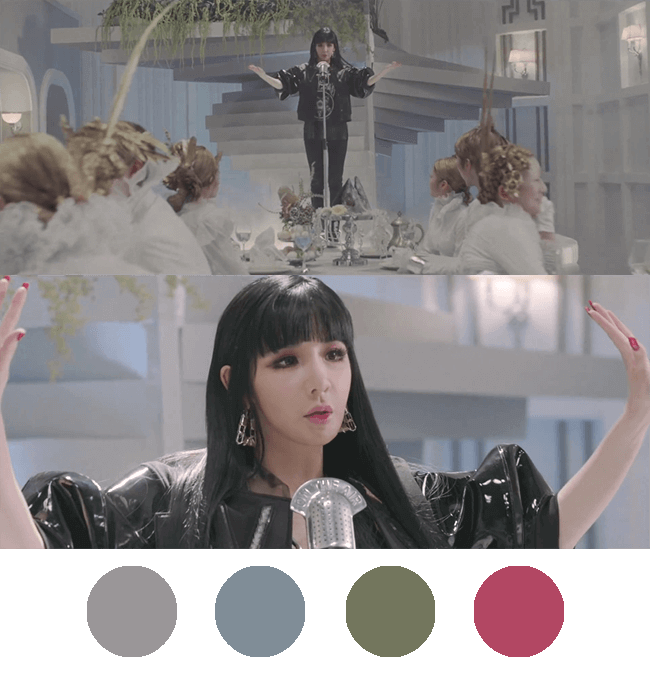 Within the CG world, Bom seems to be some kind of dinner singer distracting the guests from the band members coming to destroy the party… Here, the scene is pale – dull greys and greens create a decadent yet bland feel – but Bom’s nails and lips add tiny touches of pink to the frame.

She appears first in this scene. The small pink and red tones hint at the arrival of the rest of the band, who subsequently use red smoke and fire as their arsenal in damaging the room. This is a clever use of colour, as the reds and pinks start to infiltrate the air and dominate as they gain control.

The pink haze they bring the room matches the tones in their hideout from earlier.

Finally, the blue of the virtual world and the pink of the real collide as they escape down a tunnel, triumphant. 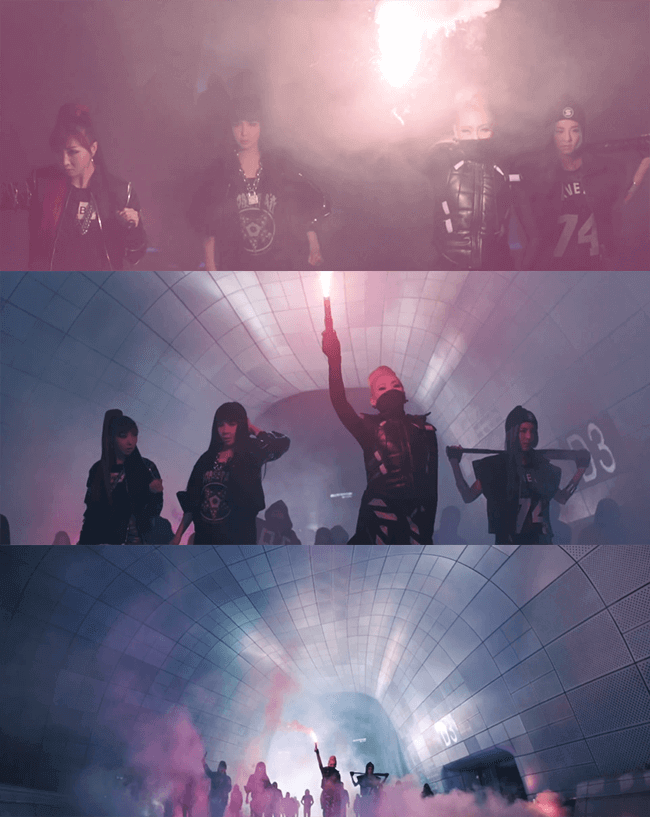 Describing this video doesn’t do it justice – here are the videos (Korean and the faster-paced Japanese edit), along with some other performances worth watching.

Live performance without Bom & with rap

The best songs to run to

Feeling like black. This are the perfectly neat nails on my left hand; my right hand looks like a gothic impressionist painting.

Wow it looks like such a good quality video!! Crazy it’s just a music video! And that dance is soooo cool!!

It is the best ever haha. Yes and so much fun!! I taught it last year at a workshop and it is so good especially the breakdown!!