The Spartan Races are a set of three courses that ascend in difficulty – the Sprint, Super and Beast. Sprint, which is what I did, was 5km, with about 15 obstacles. If you complete all three in a calendar year, you get the ‘trifecta’ and a more elaborate medal.

I went this one alone, having tried to rope friends in with no luck. There are definite benefits to going on your own – I could go at whatever pace I wanted, not hold people up or be held back myself if I had a burst of energy – but had no one there to help or give a foot up over walls and had to rely on people who just happened to be with me. It was also a true test of stamina as I only had myself to keep me going.

Sadly the whole thing about Spartan races is keeping the course under wraps so you don’t know what’s coming, and there is also no map available even after you finish. Having done some research online I had a pretty good idea of the standard Spartan obstacles – the rope climb, the spear through and sandbag carry – so was expecting those. I’m doing this purely from memory now and am bound to miss some obstacles out, or get them in the wrong order. You also forfeit if you fall an obstacle and have to do 30 burpees.

I was in the second wave and they were running late by about 15-20 minutes from the start of the first, which itself hadn’t started on time. So a lot of us were waiting in the start pen for ages being warmed up and chanting silly things lead by a Spartan on a van (man in a Spartan costume) and the race organiser (bearded, muscly chap) who himself looked terrifying.

Because we were late, and because the first wave is for the super-competitive, the runners were already coming back through the spectator area, having done a lot of course already. I learned later just how fast these guys must have managed it to get back there in that time.

But pretty soon we were off. I was near the front which didn’t last long, as I realised after a bit I felt I could not get enough oxygen into my lungs fast enough and was breathing pretty heavily. I paced myself and held back, managing the first environmental obstacles like ditches and stream crossings fine.

Next came small hurdles – wooden panels maybe 2-3 feet high – about 20 in a row. I couldn’t ‘hurdle’ them, terrified to trip and fall because they were just past a comfortable height to leap, so had to clamber over each one.

There was a sandbag carry with bags sized for men and woman. I named mine Sandy and we had a blast going up and down a hill through some trees.

The absolute best thing about this race was that I managed the walls, for the first time ever, despite being so scared and having failed at them in Mudder. The first wall was about 6 feet, and I developed a technique which is completely wrong and very painful, but got me over unaided. I held onto the top, almost did the box splits, and hooked my left ankle over, then shin, then knee, and dragged myself over the top lying along it before lowering myself down the other side. I tried to do the same for the second, but it was about half a foot taller and I couldn’t get my ankle up without a guy giving me a boost. But same technique, and I was over! I couldn’t believe I had actually managed it unscathed – and it gave me such a confidence boost.

We ran on a little and reached an angled wall – similar to Glory Blades in Mudder – which was difficult because as well as being angled at about 45 degrees (top of the wall facing you) there had been a trench dug out under it filled with hay, so if you fell, you fell down further than where you’d started. I dangled off it for a bit, before the same guy who had helped me before just yanked me over.

My major embarrassment was the monkey bars as I launched onto them forgetting that I would actually weigh something, didn’t brace myself and dropped onto the hay. I was also wearing fingerless lifting gloves, which were so helpful on any wooden obstacles, but useless on anything metallic. I am either going to get ones with better grip or leave them next time.  Anyway, I did my 30 burpees and about 15 minutes later was on the move again.

I staggered round to the wall hold – a wooden wall with blocks of wood nailed to it at various angles – one line of blocks at about shoulder height, they other about a foot of ground. You had to make it across without falling off, and having just failed at the monkey bars I was so determined to manage it. It was hard on the hands to grip, and so difficult when the blocks were at an angle that you couldn’t put both feet on, having to dangle and jump to the next. But I managed it – and this was one that was seriously catching people out, so was super happy – and carried on.

We then faced an even bigger wall, but it had three sections of various heights and the middle had foot blocks. It was maybe 10-feet high, but I managed to get over using my new Terrible Wall Technique™.

By this point I was running with a group of guys who were a team, and we headed to the barbed wire crawl. I wish I’d got their surnames; I lost them later on and have no idea who they were. We did make it into the official video for the event though! Or rather, they did, while my bum made an appearance.

Then came the worst obstacle of them all – the river run. I was expecting there to be a stretch of river because we were warned in case people had difficulty swimming, but in no way was I expecting it to be so long. I mean really, really long. I think about 1.5km of the course was in the river and it was so difficult. The bottom was either mud, grit or rocks, and you couldn’t go fast because it kept changing. It was also freezing to be submerged up to the waist at parts for so long. I think it must have taken me about 20 minutes. I was now alone, plodding along, the group of guys having pushed ahead, and quite frankly I wish I’d brought a book. I slipped, not thinking anything of it at the time, and banged my shin, gashing it deeply. I was surprised at the lack of supervision on the course at this point – I really was completely alone and not able to see anyone ahead or behind me. I don’t think that was organised well, because anyone could have slipped into the water. I fell up to my neck at one point and had the breath knocked out of me.

But finally, finally, it ended and I rounded the corner out the river straight into the spectator area. I was exhausted by this point, trying to keep chipper in front of about 200 people. Up and over an A-frame of cargo netting (tall enough to walk under) and over to the rope climb. I had no chance. I cannot climb a rope. So I said hello to my second set of burpees.

Once they were done, it was onto the petrol can hoist which involved hoisting a weighted can up about 20 feet. Again these had differently sized cans for men and women which by this point I was grateful for – sometimes you have to accept that physically you gotta take the lighter option. I was almost lifted off the ground by my can when lowering it so it was pretty heavy, and idiot that I am, despite instruction, let it down too quickly and got rope burns and painfully tangled up in the rope.

Finally free of spectators, the last loop of the course took us away again to several more obstacles. Rolling a boulder (some were carrying it – not for me!), dragging a tire (again various choice of sizes) and the spear throw to a target. I missed, and did my burpees.

The penultimate obstacle was to go up a slanted wall with a rope and down cargo netting.

I found this race more of a continuous challenge as more obstacles required carrying or dragging something for a distance, or enduring the river, rather than coming to the ‘big’ psychologically difficult ones in Mudder. 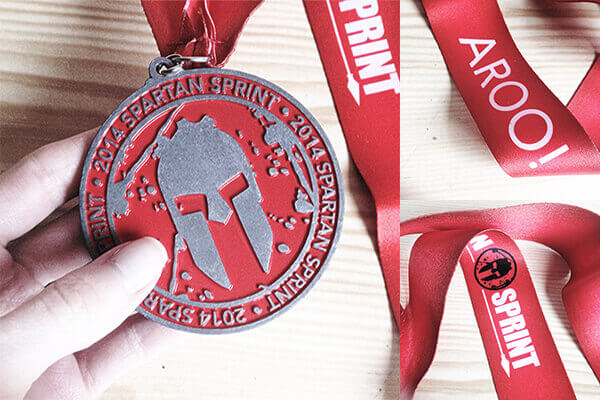 I definitely felt less happy during the race this time, but I did really enjoy it. I love the medal too. I know I want to do more Spartan races next year, maybe go for the Trifecta, but will have to step up the training because this was an absolute slog!